on your left ma'am 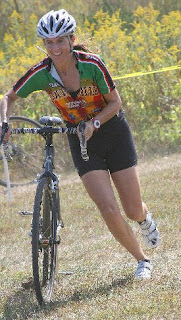 that had to be one of the highlights of todays' cyclocross race: they started the juniors 30 seconds after the women, and soon into the first lap, i started getting passed by the little whippersnappers. they would politely yell out "on your left" or "on your right" but really. did that one kid have to come flying by & yell "on your left MA'AM" ? for the love of god kid, i might be racing masters', but i am trying to be badass here. ma'am is not really working for me (although, truth be told, there was nothing badass about my riding). would it be bad form to stick a leg out & trip that kid? i complimented the kids' coach on his very polite tiny racers, but suggested that if perhaps they could just leave the word ma'am off altogether, that would be awesome.

today was my second ever cyclocross race. i got a shit start - dead last right off the line, and going into the first 180 degree turn, (from a downhill to an uphill) a girl went down in front of me, and i went down right after her; and had to run up the hill and do a really bad remount at the top in front of more people than i care to think about. and now i was way more than dead last. so i honestly have no idea what i was smiling about in this photo.
but at the same time that i was bummed about the dead lastness of my situation, i knew i'd catch some girls in the hills. i did ultimately catch & pass four girls. three of them on the hills, but my best moment (after being called a ma'am of course) was passing someone in a crazy jacked turn that took me five tries yesterday to get right. i may have said woo hoo out loud, not sure. lets just say it was a proud moment. after that, i had a girl in my sights and was going to pick her off next, but she got away from me when i messed it all up in a shamelessly bad dismount & remount over an obstacle dubbed the "mini green monster". (an off-camber turn - there was very little about this course that wasn't off camber - into an obstacle that was a two step up & two step down run over thingy).
there was a lot of buzz about this course; and how technical, difficult, crazy, insane & "crossy" it was. i spent all week reading forum posts getting more & more jacked up about it (and not in a good way: i was worried as all hell). it was being billed as a very technical course. and i'm not a real technical girl. give me a shit long road race and throw a bunch of hills in & i'm happy as a clam. but off camber turns? 180 degree turny stuff from downhills into uphills with a pond thrown in the way? i swear, i fully intended on doing a shot of bourbon 30 minutes before the start just to take that edge off. most of my friends didn't bat and eye and said that was probably an awesome idea. another friend was convinced i was going to be yakking up bourbon halfway through the race; and as i came around on the second lap he yelled: "hows that bourbon working for you?" - i yelled back with "i didn't take any", to which he then responded " maybe thats your problem!". and the next thing i heard from another teammate was "get off your brakes! trust your bike!"
lets just say i was riding way too timidly. way. way. too. timidly. (and there's a pattern here). that said, i had way more fun at today's race than i did at my first race two weeks ago. after that first race, i thought i could be screwed. i wasn't sure i even liked 'cross. i thought maybe i was better off cheering from the sidelines & ringing the cowbell. which bummed me out cause i've got a totally sweet bike that i so don't even deserve.
but today? it was a far more difficult course than my first cx race. i had a really bad start and didn't ride anywhere near what i am capable of doing (i had so much gas left in the tank at the end, i could have done another lap if not more; and i was nowhere near feeling like i wanted to throw up. there was no suffering or dry heaving.) i have the fitness and endurance but don't know how to use it all up because i just lack the technical skills. which is probably why i had such a good time & didn't suffer much: i didn't work that hard. the hills were easy. it was the technical turny shit where i pussed out & used my brakes way too much and slowed way the hell down.
all that said; today, my second cross race evah; i brought home some bling. yours truly got her first ever podium. 3rd place in masters and i think 5th overall. although i was completely disappointed by the lack of an actual podium on which to have my photo taken to document the awesomeness that is third place. my bling is a sweet trophy: a gold chick on a bike with boobs and a ponytail. i've been in the money before at road races; but money gets spent, and i gotta say there is something about a trophy that i am totally digging. and much like the high of finishing my first marathon and wanting to wear the finishers' medal for a week afterwards; i shamelessly carried around my golden racer girl with boobs and a ponytail for anyone who cared to see it. and really, whether they cared or not - i showed it off to them. 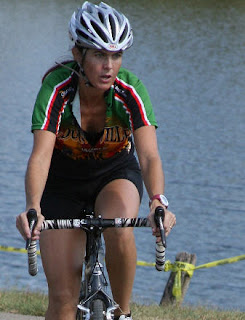 i'm no longer worried that i don't like 'cross and i should just return to the sidelines & ring the cowbell. i can still do that. before and after my race. today was an absolute blast. maybe it was the fact that my team put on the stellar race that has been getting kudos all day. maybe it was the fact that it was a gorgeous day, the venue was perfect and according to mr. uci official - it was the best course he had seen in the states, "just like europe". the tunes were rockin' and the course was hard, yet fun as hell. maybe it was the fact that every woman on our team who raced took home a trophy. maybe it was hanging around with friends' all day, some who drove from as far as kansas to hang out with her teammates. maybe it was just watching some great, great races. or maybe it was the trophy with the boobs and the ponytail. i don't care what it was - it was a perfect day.
i got some work to do. but by the end of the season, and i'm working on sooner; the goal is to ride like i deserve my sweet bike - golden girl on a sweet bike with boobs and a ponytail.
Posted by zanne

Great race report. Hahaha - take the brakes off - I like this and can so relate to this. So often I finish with enough fuel in the tank to ride another century. Confidence is just such a difficult thing to train ...

Ahhh didn't know you were feeling iffy about cross after your first race. It is the same old song...the more you do the better you'll get. We haven't had any races round here yet.

exactly betty, i remember being so scared and riding so timidly at my first road races too ... by the end of the season, i was feeling so much better and more confident in my abilities & it finally started to show in my placings!

groover - yes, confidence is tough ... just need to learn to trust the bike & let it fly! think that will come with more & more experience & races ... in the meantime, will just keep chanting "get off the brakes get off the brakes" over & over in my head!

I always love your race reports!! You looked so focused on your bike.... ma'am :) If I was beside you I would totally move over as you screamed by me!!

Congrats on the trophy! Very cool! I *really* like your bike, but I'm biased having an X6 too. The zebra tape looks great. Did you do some other mods? Just found your blog when I googled for other X6 riders and will visit again. Happy riding!

hey sarah - cool! glad you found the blog ... i do love my cannondale - its the first one i have ever had, so i don't have much to comapre it to. (i ride a FELT on the road & love that too). i got a sweet deal on the bike & so while i didn't make any modifications to it, it is a bit different from the standard X6 in that its' actually mostly an X4 - all X4 components on the X6 frame. the zebra tape is all i added! and i do love the tape! just wish it would make me corner faster!

Love the race recap and you totally rock!! Speaking of boobs, I'm one for not coming out to cheer you guys on. Got caught up in stupid stuff and would have rather been there than where I was. Your hard work is paying off!

"On your left, ma'am" - Oh, that's so funny! Haha! Congrats on your podium finish, that's awesome!!

You're smiling in that photo because no matter what, you love what you're doing.

Congratulations on the busty trophy! That's so great. Even better is your whole attitude about the race. You had a great time and it shows.

I love the pictures too!

Great RR! You podium'ed! And you got a cool trophy! How awesome!!

Are you coming to Habrin park in Cinti on the 12th ???

judi - yes ... i'll be at Harbin Park on Sunday the 12th! i may try to come up for the race on Friday too (not sure where that one is) - but won't be able to make the saturday race. let me know if you'll be there.