i always get to thinking about stuff on april 15th. usually, it’s two things: i’m wondering what we’ll spend our tax return money on and i’m remembering the anniversary of moving to louisville.

except for last year. last year i was thinking i was knocked up and the tax man hosed us. i wasn’t knocked up, but the tax man did hose us. maybe it wasn’t the tax man, but it was someone. last april 15th was the start of one of the worst years i think we’ve ever had in our lives together cause of all that shit hitting the fan at my husbands company. tomorrow marks our twelfth anniversary in louisville and brings with it the slightest sliver of a shimmery silver lining. i’d take a deep breath if i wasn’t worried i might put the whammy on things. but it all got me to thinking about the place where we started our life together.

we’ve lived a lot of places, and as much as we fantasize after every episode of international house hunters about selling everything and moving to bora bora i really think this louisville gig is just gonna stick.

springtime in louisville is one of my most favorite times of the year. i’ve never lived anywhere that had a real, honest to goodness springtime. we lived in maine for a while, but it just goes from winter right into mud season and when we lived in southern california, there were no seasons. it was just 70 and sunny all the time. which made me a little nutty. i gotta have seasons.

the kids always ask us to tell them “about the time you lived in california”. whenever they see scenes of the venice boardwalk in movies and we say we used to live there, they’re wide eyed in disbelief. i think they thought that a dreadlocked, roller skating, guitar playing dude was just made-for-the-movies material. they were gobsmacked when we said we saw him all the time on out morning walks to our favorite breakfast place. “you mean he’s real?”

we lived on rose avenue. just a half block from the boardwalk. i always knew once i graduated college that i’d go somewhere. cool. i think nyc is the coolest place ever, but i spent plenty of time in new york city growing up, so new york was out. so during my spring break senior year, i flew to san francisco for a few days and then to los angeles. i stayed with friends and marched into every private elementary school i could find looking for a teaching job. the school in santa monica was the one that called me back and offered me a job. i love it when others make my decisions easy. santa monica it was.

i graduated that june. and spent the summer cocktail waitressing, bartending, and taking flying lessons (and this would be the summer that began the rest of my life). in august, my mom and i packed up my graduation gift; the 1979 280 sel mercedes (it must be said: british racing green with proper tan leather interior and the original becker am/fm cassette radio) that she and dad had driven for years and drove it across the country. we arrived in santa monica and went on an apartment hunt that i think slightly horrified my mother. mostly because the apartment hunt was not taking place in lovely santa monica, but in the more quirky, affordable venice beach where the digs were too small and slightly dirty. and i’d hear the occasional, is this a safe neighborhood?

i think the only thing that saved me was the thing that i actually thought would get me nearly disowned, or at the very least – in a really big fight with my parents. i was fully planning on living in sin. and told her so.

in fact, i had five thousand dollars in cash from my partner in crime from the sale of his racing bike and every.single.thing.he.owned. yes. he sold his racing bike. and we had only just met. sorta.

i met him about four months before moving across the country – this was part of that summer that would begin the rest of my life - and invited him to come with me. i knew if i didn’t invite him, he’d show up on my doorstoop one day anyway. my mother was relieved that i wouldn’t be living alone. i’d just be a sinner. she promised she wouldn’t tell my dad.

i made good on the whole thing seeing as i married him. but my dad knew all along anyway. it’s stuck for nearly seventeen years, so i think we’re good. anyhow. i digress.

we lived on rose avenue. in a pink building that looked like the one in the karate kid only minus the pool. we’d walk the boardwalk and see the dreadlocked, roller skating dude. and i never knew that muscle beach was a real thing until i walked by it that first time. we had our favorite breakfast place on the boardwalk and i still make the frittatas that i fell in love with there. i almost got a tattoo – several times, but am glad i waited until i was 36 and 40 to make that leap. we used to go to rose cafe up the street and the firehouse restaurant around the corner. our regular coffee shop haunt was the novel cafe and i remember shopping at what i am pretty sure was one of the first whole foods a few blocks away.

we’d go north to zuma beach when we wanted to swim or walk along a shore that didn’t have garbage rolling in with every wave. we’d hike in the santa monica mountains, and go for day long motorcycle rides on the pacific coast highway and in topanga canyon.

steven worked two jobs at van nuys airport. one involving emptying the honeybucket. not cool. and another involving refurbishing gulfstream jets for the rich and famous. very cool.

i was an assistant kindergarten teacher and would watch as some kids got dropped off in the carpool line in limousines and others were brought into to school by their very famous parents and i could chat for a moment with them or hold their new babies and talk about connecticut.

we shopped at lucky market with a calculator and put things back when the number got too high. we ate a lot of rice with sautéed zucchini. i’d go to gelsons now and then to just ogle the gorgeous perfect pyramids of fruit.

we’d go to the third street promenade in santa monica to catch a movie, but not before standing outside the wells fargo atm machine on fourth street to get money for said movie and changing our withdrawal amount down to an amount we actually had in the bank.

we were there for the 1992 los angeles riots. i walked home from work that day as shopkeepers on fourth street were boarding up their stores. the skies were black from the smoke and our landlord told us to have our bags packed by the front door in case we needed to evacuate. we went out to walk the boardwalk the next evening only to find it lined with armed national guards telling us to go home.

we thought a few days after the riots broke out would be a good time to drive the mercedes into south central to volunteer to bag and hand out groceries. i’ve never seen anything like it. everything was burned to he ground and buildings were still smoking. i still think of it when my kids get crazy and i say things like can’t we all just get along.

we think about our stint in california every now and then. we wonder what it would be like if we had stayed. and we think it would be fun to go back and visit all our old haunts.

we’ll probably go back someday when we go visit our kids. cause our son will be working for, or running pixar someday and our youngest daughter, lulu – who wants to be a roller skating waitress at sonic when she grows up - will likely be a surfer girl living in a vw van that my husband refurbished for her.

we're not exactly regular church-goers. i'm a bit of reluctant catholic. but that good ol' catholic guilt always makes an appearance around the holidays and i feel a need to suddenly drag everyone off to church. 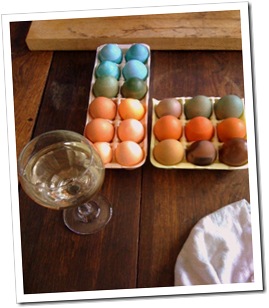 so i start making arbitrary we're going to go to church announcements. sometimes weeks in advance. sometimes days. sometimes i just spring it on the kids on the actual day of the most holy holiday of the year just as they dig into their baskets.

my husband says i should work on my timing. 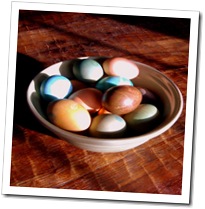 to which lulu responds
what! that's gonna ruin the whole day!

and then annabel says
lulu! it's a big day. it's the day jesus rose from the dead.

and lulu says
what!

annabel
well, it's not like he's a zombie or anything. 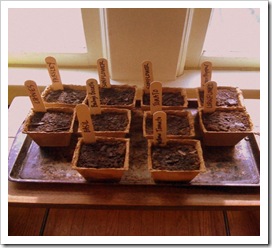 we never did make it to church. instead, we planted some seeds, picked up some poop from the backyard, went for a bike ride and had some friends over for a beer and the tour of flanders.

i’ll be going to hell in a handbasket someday. i hope my husband takes the kids to church.