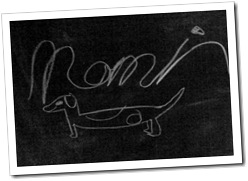 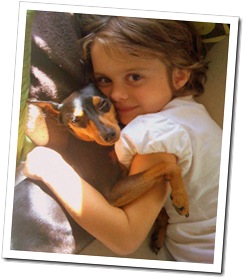 I have tears in my eyes, I am just so happy. You guys ROCK. Can't wait to see you again in a little more than 3 weeks! XXOO!

You took Judi's dog? I am so out of the loop. That is too funny - and really really good.

aw Judi ... am so glad you're happy! It'll be fun to see you guys again. He's such a sweetie & we're super glad we could give him a home. He's loved.

betty - yep! A few days after I read Judi's post, about how the little dog was back but that they couldn't keep him, Judi & I were texting and emailing about him. And then it got a bit whirl-windy with organizing meeting him, and doing the adoption, etc ... but it all worked out just perfectly & he has a new home! It's a pretty open adoption - Judi and Dominic are visiting in a few weeks! :-) And we'll all see each other at CX races this fall!

What a great story. I read about Nani on Judi's blog and was sort'a sad when she wrote that he will be adopted. Now i'm really happy to know who adopted him. How cool is that! And I guess Nani is a very lucky little doggy to have found two cool people like Judi and you (I take it Judi will be his god-mother?) :-)

That picture brought tears to my eyes too. They both look so happy. BFF's!

Love it! I used to have a doberman named Kona and she was THE best dog ever. If I had more room, I'd love to get the miniature version! So glad he has such a loving home. Great pictures too and I can't wait to see more.

Pamster, his foster 'parents' had the most gorgeous Doberman - Ari ... they also had two other very large & amazingly well behaved and gorgeous dogs, Fausto (a pit bull, maybe the most gentle dog I've ever met) & Lucy -- good people found him & helped him to find a home and I'm super happy it was us that was able to give him one! I bet you'll meet him at a CX race - he's super good with people ... we're hoping some of that will rub off on Mabel & she won't be so skittish!

What a happy adoption story! Definitely a great addition to your family!

Do you not remember the PRESS0-ON NAILS...WINE...in CVS.. pregnancy kit???

You are crazy like us... but that is a good thing.

Sometimes the craziest ideas are just the best!

stuart - ain't that the truth! i swear, we were amazed at how seamless the transition was in the first few days ... but 6 days later, we can't believe that it just keeps getting better & better. This was totally meant to be - he's the coolest little dog & has made such a big impact on family/doggy dynamics in this house -- all for the better. good doggie karma.

Lily on the Road said...

So glad he found a good home, he is such a handsome lad. If I lived in the States I would have adopted him...

glad Judi will be able to see him and give him all her love too!!!

Apparently, Claudia told Lily ALL about Nani yesterday at school. I have a sneaking suspicion that they may not be sitting next to each other for long...

Awesome! I love dogs so much. That picture you have posted is amazing. so cute! I hope you and puppy will be happy for a long time. I really enjoyed reading your blog and learning more about running and biking. With your positive outlook on life, I feel that your blog would be a great addition to Wellsphere's HealthBlogger Network (HBN). The HBN has over 2,600 bloggers that share a common goal to share their knowledge with others, which enables Wellsphere to provide information that is personal and relevant to over 6 million visitors a month.

Feel free to visit our Health Blogger Network at http://www.wellsphere.com/health-blogger, where you can apply to join. Or just email me at hua [at] wellsphere [dot] com.

Have a great day!
Hua
Director of Blogger Networks
twitter.com/wellsphere