i don’t want to be a hobo

we just got back from a weekend of bike racing followed by a bonus few- days-off-from-school camping trip. i think most folks that read this know we go camping & to races in our airstream motorhome.

i love our airstream. and i love my husband for being the driving force -both literally & figuratively behind it’s purchase and addition to our family.

but it wasn’t always this way. in fact, when he first proposed the idea of it i was pretty convinced i had married the wrong guy. nice girls from darien, connecticut didn’t do rv’s. i wrote a fun little story about that a while back. read it. it’s a good one. i’ll wait.

that’s the thing about the airstream. it’s full of good stories.

just recently, i found a bunch of old pictures that reminded me of one of those good airstream stories. only, the thing about some of these stories is that they aren’t always ‘good’ while we are living them, cause many of them involve being broken down on the side of the road, and i usually have to drink a bottle of wine to make it through to the other side.

the airstream is old. way old. we’re just a few years away from historic vintage plates  seeing as its’ circa 1986 and 200K + miles.

we used to break down so often that we bought another car. a small, light car for the sole purpose of trailing behind the airstream. that 1971 car does have the dubious distinction of being officially ‘historic’  & as such needs a bunch of work. this is how we roll. old shit that needs a lotta work. like we have that kind of extra time on our hands. we call it the LEM. it has been our escape vehicle many times. the thing about the LEM though, is that it’s really only good for the emergency trip to the napa auto parts store for the 79 cent bolt that will save your vacation. it’s not good for going over 30 mph.

i digress. but i’m trying to set the stage.

so we’re driving back east a few years ago – our oldest (now 13) may have been around 7 or 8 and we left kentucky the day after christmas to go visit family in connecticut.

all was well until we hit somewhere just outside youngstown, ohio that first night and around 11pm in the perfect twilight-zone-pitch-blackness, the water pump blew.

we coasted off an exit in east jesus and rolled into a gas station. 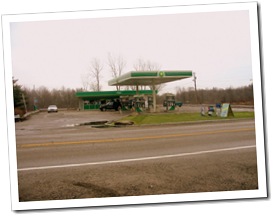 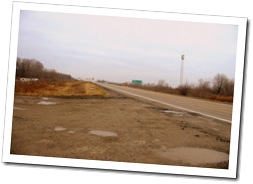 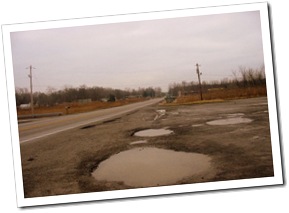 i’m sure i was well into the wine by now and my husband went in to the station to explain the situation to mom & pop who said it was fine for us to park the night there.

we had to let the cops know when they knocked on our door at 3 am that mom and pop said it was ok.

the next day my husband took the LEM to a napa auto parts store to get a new pump. we moved the airstream across the street to a lovely spot so he could fix it and while he was under the airstream, the kids scootered in the parking lot and made ritz & cheese whiz sandwiches.

the fix took longer than expected & we had to stay another night in the parking lot of the ‘hot rod inn’. thank god for the LEM, the ruby tuesday a couple miles away and all that wine i packed.

the next day, my husband set about to finish the job he had started. i’ve blocked some bits out, but there’s a strong possibility i was being a nag about wanting to get the show on the road; and there was a lot of stress in the east jesus junkyard air and in a weak moment (and my husband never has weak moments) he accidentally poked a hole in the power steering and power brake pump with the tire iron he was using (and he has conceded this was stupid) to tighten the belts.

and we’re in for another night at the hot rod in parking lot. 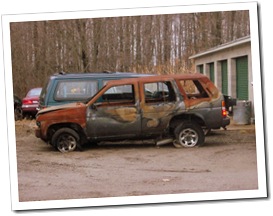 the next morning, my husband drove the LEM back to napa auto parts to see a man about some new stuff, and naturally, it would have to be ordered and it was gonna take a while.

it was starting to look like we were gonna be in this parking lot for a while. and the kids were getting tired of card games in the airstream and scootering in the pot-holed parking lot and we were running out of cheez-whiz.

and my son was out in the pot-holed muddy parking lot in the same clothes he had been wearing for two days and all of a sudden he started to cry and he said “i don’t want to be a hobo”.

and i tried not to laugh and i explained that we still had a house back in kentucky and this stint at the junkyard was just temporary.

but i couldn’t help but wonder. and pour another glass of wine as we settled down for night number three after an afternoon and evening of trying to find a car rental place when we didn’t even know where we were. and this was way back in the day - before my snazzy 3G iphone and tomtoms and stuff.

on day three we found a car rental place not too far away – you might wonder why we had to rent a car what with that LEM we had with us; but this is where that previous reference to not being able to go over 30mph comes in. that, and the fact that it didn’t have the holding capacity for five homeless people, two dogs and all the stuff we were bringing back to connecticut for a belated family christmas.

so, we talk to the toothless manager of the junkyard hot rod parking lot and ask him how much he would charge us to leave the airstream in his lot for a week while we left to go celebrate a joyous holiday with our families. in their houses.

he said no charge. we wondered if it would still be there when we got back. 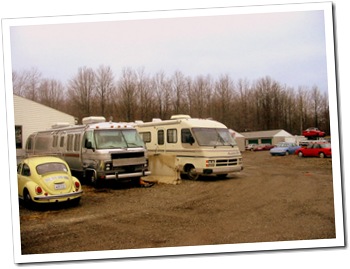 we got our rental car and on the evening of day three stranded in east jesus, but not before the dog threw up in the rental car and flung her regurgitated food all over the kids; we were finally on our way to what had become an extremely short, belated christmas celebration in connecticut. which was lovely and joyous. and then we packed up the kids, the dogs and the rental car and headed back to east jesus with hopes that the airstream hadn’t been dismantled & sold for parts.

the airstream was still there, the parts were in and steven fixed everything. but not before celebrating new years’ eve as hobos in the street rod motors junkyard lot in east jesus ohio over some bad take out chinese food. these things make for fun family stories.

hey kids - remember when we were hobos? 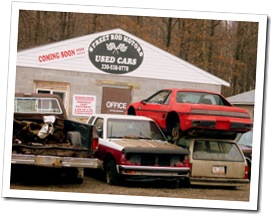 My wife has always wanted an RV. I should probably have her read this, just to make sure it's what she *really* wants :)

you gotta get one ben! Like I said, some of the stories aren't always good while they are happening - but this is one that really gets us laughing. Nothing like some family bonding in junkyard lots over cheez-whiz.

You & Kelly gotta come check out the airstream at the next race!

my god I thought LEM was for lemon, cause its shaped like a ...oh, never mind. That may be the funniest thing you've ever written. And you have clinched me never buying an RV...actually that had already happened.

Hope you had a great race today, you looked like you were having fun and were in the mix. Maybe you're randomly assigned finishing place was a good one.

segal, i swear i may have put the whammy on things. cause its' been a long time since Steven has had to venture under the Airstream, but that streak was broken today - (it wasn't the only thing broken - you can add Steven's collarbone & the transmission fluid hoses to list of broken things today).

I'm sick today but that story had me laughing & feeling better! When you get enough distance from yesterday's events maybe you'll post another wonderful story?

Ah memories, some of of the fondest moments are from the darkest of hours!

Of course at the time it's a total shit sandwich!