the planets aligned yesterday, my mojo was rockin’, my head was screwed on right and it all made for what will henceforth be known as:

and this distinction will stand until the day i have an even better race – which i now know is actually possible and will indeed come; cause i have finally figured out that it is not my lot in life to be that girl.

that girl meaning the one who is always off the back and time trialing to catch the group.

yeah, that girl. nu-huh. i don’t have to be her anymore. i know i’ll still have those days where i am that girl. when the planets don’t align. cause that’s bike racing. but yesterday? well -

the planets did align and road racy lightbulbs went off all over the place and i was the girl who stayed in the pack the entire race. i even led the pack now and then. i even worked with teammates and lent a wheel when they were tired. i rode smart and stayed protected. i even, get this – felt so good i wondered what would happen if i just took a flyer and did an attack. shut.up. i did that. i got in a break, and i closed gaps when i let them open up – and it wasn’t often - in a turn. i sometimes wondered who i was and what i was doing. and it felt good.

sure i felt a tiny bit of bile rise up in my throat on the start line. but it disappeared as soon as it arrived. and sure, i threw up a little bit in my mouth at one point. and yeah, i fell off a weensy bit in a turn, but i caught on real fast. that break i was in? we got caught. that flyer i took? some cat 2 girl chased me down. but mostly, the usual mojo-messing fear was totally m.i.a. even when i couldn’t clip in right off the line, and it took me forever. i didn’t get all jacked up and worried. i just kept pedaling. i wasn’t intimidated, by anyone or anything. and when i watched all the squirrely wheels and figured a crash was imminent?

cause the mojo was rockin’. cells were firing. i was focused and relaxed. i never even knew what lap we were on, and i am usually acutely aware of what lap we are on - until yesterday. i was too focused. i couldn’t hear a single word that anyone on my team was yelling as we passed by.

and now i need to figure out exactly how to get the planets to align again. so i can recreate that whole i am so rockin’ it right now and i feel insanely good and strong feeling.

i’m wondering if it was the two margaritas two nights before the race, the ones that went down so easy they were like my old friend candy. was it the way i packed for the race? flasks full of bourbon first, then kit, helmet, shoes, bike? was it the enormously shitty and not easy ‘openers’ spin the night before? was it left shoe first? was it fatboy slim and ‘ya mama’ on the trainer as last song before hitting the line?

or. is it possible that it’s a new training schedule, a new coach and a new attitude about all of it? is it a year of road racing and training under my belt and learning a thing or two about a thing or two? or is it just going into a race with a clear head? is it realizing what i am capable of when i stop being scared?

i don’t know, but making the margarita’s a regular gig and packing the flasks first can’t hurt. i might just go with it.

and not being that girl for once?

but instead being the one who can actually race and rock it? and not be intimidated? well. 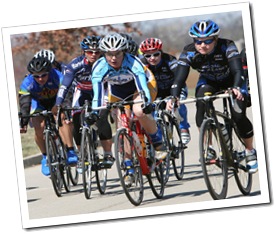 Our bikes are still mothballed waiting for the temps to rise just a touch...

I am so excited for you. Thats a great feeling and you've worked really, really hard for it.
A very cool racecourse w a superfast downhill into a turn. Strong work Suzanne! Great finish.

you brought it! sounds like you were so in the zone. way to kick some ass.

Keep the reports coming!! i just love them. Makes me get all excited for you.

I think your pre-race plan is dead on target. Maybe I will try that.

Tequila has been known to be a great stimulant. In my younger days, I could tell how well I would ride the next day by the number of shots I did the night before (there was a sweet spot).

Having a good race this early is a good sign, just don't let it get the best of you. Stick to your program, what ever it is. Don't add rest days or more work just yet. If you have a coach, talk to them, or just people you know, that know how you ride and what your goals are. It's only march, you have the whole season still.

An't it grand when we get out of our own way and take all our worries away too.
Great race, stay with your plan and expect a great season.

GO ZANNE! that is awesome. glad you are rockin' it girlie.

Oh I missed this post. I know what it is girlie --- confidence -- you got it!