here’s the thing of it

i pinned a number on and raced last weekend. and then i did it again this weekend.

i still do that occasionally.  pin a number on and race my bike. ‘race’, as always, being a strong word, cause sometimes i like to think of it as just riding my bike around in circles in which i happen to be with other people.

i just don’t do it as often as last year, which was just about every. single. weekend. we cut back on the racing this year. cause it’s a lot - to race every weekend, pack up the airstream and bribe the kids with donuts.

plus, all that racing requires a lot of training, hard work and dedication.

i couldn’t muster it up anymore. the dedication. something had to give. so, we’ve been busy with other things:

like trying to show some pride in home ownership, cause all that racing and being gone every weekend on those long base mile rides and stuff and your house will start to take on an abandoned, near-condemned sorta look, and the backyard will turn into jurassic park. at least in kentucky it will. i’ve lived a lot of places, but i’ve never seen anything like what one weekend of rain’ll do to a backyard here. neglect it, and it will take over your life. and it takes a long time to reclaim it.

so we’ve been painting, and sprucing things up. we even put a new roof on the house. we got tired of putting out that bucket on the floor of our third floor bedroom while the backyard grew into a rainforest every time it rained while we slept. we’re digging trenches for better drainage, and we’re finally clearing out the garbage tower of doom in the basement and putting it in our front yard - much to our neighbors’ [and i quote: “in fifty years’ this neighborhood has never looked so trashy”] dismay - for junk pickup. which, as you can clearly see by the entire neighborhood, nay, the entire city, mrs. barnsworth, that it is junk pick up day in louisville. perhaps you should have scheduled your “fancy executive” meeting for another week  - plus, that should give you plenty of time to hang some more doilies in your front window.

i’m sorry. what was i saying?

oh yes – pride in home ownership. as soon as a clean spot is made, all the other stuff that hasn’t been spruced up yet really starts to stand out and look, um, bad. and the list gets longer.

the long list, among other things, put racing and training on the back burner.

this wasn’t that hard to do cause cause sometimes i just didn’t want to do hill stomps or intervals and i didn’t want to feel bad for not wanting to do them. what made me feel bad was that 3 next to my name – the one that put me in the same racing category as the 1’s and 2’s.  so i downgraded cause i just really wanted to be a happy cat 4 and go back to the place where riding and racing was fun and happy. and i didn’t have to work so hard.

so in addition to painting nearly every damn room in my house and rearranging just about everything, to clear the room for more, um – painting - i’ve just been “riding my bike” as opposed to “training”. imagine that- when i’m done painting, or pissing off my neighbors, i just go out and ride my bike for the heck of it. sometimes i ride with people. sometimes i ride alone. sometimes i drag (and it’s the very definition  of “kicking and screaming”) my ornery, reluctant fourteen year old out on rides & you’d think by his protestations that i had just announced i was gonna pull his fingernails out one by one instead of “hey lets go for a ride”. and we ride and it doesn’t take long before there is a smile on his face and he says “yeah, this doesn’t suck”.

score one for mom.

and then, when he just sits on his bike in the dining room where we currently store it cause i’ve rearranged us out of a place to put it what with all my pride in home ownership and rearranging and such; and he says, “hey, i wanna go for a ride” - it’s all good.

i ride hard & fast when i feel good and super slow when i’m feeling not so good. sometimes i pin a number on and race and feel good and sometimes not  so much. sometimes i don’t ride at all and instead i stay home to be a mom. or paint. or clean. or sit back and just drink a beer.

this is my training plan.

plus, racing less just give us more time for – you know, a little pride in home ownership. 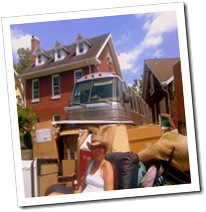 I hear ya! Moderation is the key. Cool house - my hubby would like all the brick.

GIRL... this is my kind of post!! Love the picture. I am sure that your neighbors adore what you are doing there..lol.

worth waiting 2 months for. Thanks! Skipped the Ohio State champs to just "go for a ride" and visit friends at a BBQ.

That's one stylin' airstream. could you post a few more betterer pictures?

i need to take some lessons from you. speaking of cat 4's and stuff, maybe you should think about doing the maderia crit on friday the 25th instead of HPB. it's mitch's race and there is a cat 4 race!!! NO 3's allowed!!! :)

This is a great post, very interesting points and I have enjoyed immeasurably. Lots of thanks!
junk pickup austin

I feel this is among the such a lot vital info for me. And i am satisfied studying your article. However wanna commentary on few general things, The website style is ideal, the articles is truly nice
Tangki Panel