the marathon mobile which has now been dubbed the team bus which is usually parked at my husband's office is now parked in front of our house. not because we are going away to any bike race or camping trip, and not because we are having the white trash trailer park party i am dying to have; but because it got broken into.

twice.
in one day.

my husband went to work yesterday and did his usual looksy-over the airstream only to find the door a little bit open. someone had tried to pry the radio out of the dash, they pried the little dvd players off the wall in the back bedroom and made a general mess of things. it didn't look like anything was actually missing though - so my husband went into the office, called the police & filed a report. and then, cause he was at work, he worked.

only while he was working, someone went back to give it another go. they broke in (again) gathered up all the things they had pried off the wall, dumped all the kids shoes out of a little milk crate that is at the front door and piled their loot into the crate. they didn't take the crate though, they just left it, all nice & neatly packed by the front door. perhaps they were going to take it with them on a third break in.

i went out to the airstream this morning to look for something and i saw the crate full of dvd players, some of the kids' videos (maybe you can get a lot of money for shark tales and night at the museum, what do i know?) some tools, and most curiously; the brand new towels i had bought in preparation for cyclocross races. (i've been getting the bus ready to serve as team headquarters at 'cross races this fall - towels are good things to have: they can be a nice mat for muddy feet, a cover for white couches and can wipe off muddy racers). 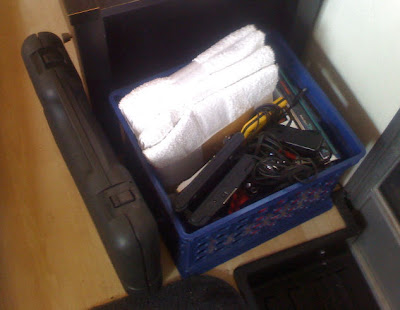 and i'm thinking.
dood. really? you were gonna take the towels too?
Posted by zanne

How sad that someone would not once but twice take things that clearly does not belong to them.

Now if I am going to the trouble of breaking in...why on Earth wouldn't I take something with me.

Maybe they were going to reorganize and surprise you!

i wonder if they got interrupted? yikes.

dvd players, shark tales and towels? i bet they were high.

they lost their train of thought with each break in. couldn't stay focused.

then got the munchies and ran off to get some snacks.

well atleast it's a thief who's into hygiene. That just sucks! I'd want to unleash some vigilante justice on those mofos. I wouldn't, but I'd want to!

hmm. lame. And what in the world? I wonder why they didn't take it on the second round? Bummer, though, I have the feeling of being broken into.