while the kids are at school...

yesterday morning, just like any other weekday - we got up at 5:50 to start the process of getting 3 kids off to school. but yesterday, instead of getting them off to school & walking back in house to dothedishesandsomelaundryandsomework, we drove to burlington kentucky (about an hour and a half away) for a 'cross race.

which was sort of exciting. felt like we were sneaking in some decadent racing while the kids were gone. and we didn't have to pack coloring books and game boys and dolls and bikes and snacks out the wazoo. we could just throw some bags and two friends in the car and take off.

the most exciting part (for me) was the very start. actually, it was before the whistle even blew. they were doing 'call ups' to the start line. this means that instead of everyone lining up willy nilly and hoping to hell you get a good spot, you get called up to the start line according to your standings in the series. when they started to call up masters' women, they called my name first & i got first pick of where i wanted to line up. and if i had really known the best position in which to be to go shit ass fast at the whistle to try and get through that right hand turn in the front of the pack it would have been even cooler. but i don't really know what i am doing. so i just picked the same spot my teammate did when she got called up first in women's open.

it's cool to be called up first. but that cool feeling lasted about 30 seconds for me, cause after the whistle blew, i was pedaling my little ass off and oh so briefly felt pretty happy about my placement and knew there were a bunch of girls behind me; but soon enough every last one of them passed me. and now the girl who got called up first was dead last. ugh.

i managed to move up two spots. and then kept trading spots with another girl for almost two full laps. it actually made things more interesting - we both had opposite strengths: i knew i could get her on the little hills, straightaways and road portions. she knew she'd get me back again in the turns. we discussed this at length after the race - praising each other strengths & lamenting about our shortcomings. we chatted sometimes during the race as we passed each other. we both agreed that the barriers were crazy high and that the best way to take those bike-busting gulleys was at an angle.

i don't have much experience with courses and so don't have much to compare it to; but this one sorta sucked. it was crazy, insanely bumpy, and at one point i couldn't really see - thought my eyes might pop out of their sockets. relaxing my death grip on bars seemed to alleviate that but then just made the flab on my arms feel like it was going to bounce right off. i did, however nail every single dismount. remounts still leave a lot to be desired - the joachim parbo superman remount works for me during practice when i go back and forth in a slow straight line but not so much in a race. i think someone even yelled to me "just get back on the bike any old way!". there were even some parts about the course that i actually liked, dare i say - enjoyed: there were some turny zigzags through some trees. and for me to like turny zig zags through trees (and to not use my brakes!) is unprecedented. to nail every dismount also unprecedented. to not get lapped by any "on your left ma'am" whipersnapper, also unprecedented. to lap dudes off the back of race in front also unprecedented. so. that's progress.

i went into the race thinking "i just gotta ride my race" - and not worry about who is in front of me or final placements and all that blahblahblah. just ride. the thing is: my race isn't very fast. my race tends to be slightly tense and anxious. that said, each lap is faster than the one previous, and with each passing lap i settle in a little more; there is less anxiety and subsequently more energy; but by then, the race is over, and its too late. (note to self: pre-ride more than 2 laps). but the fact that i enjoyed any single stretch of the actual race (and not just the post race brew) is new and fun. i actually rode a little bit better than i ever have and although my results dont show it (also - deepest field to date); weensy progress is being made; one lap, one crazy cross race at a time. so. that was it. after the race, we milled about forever waiting for results, and my husband's second place podium shot. (thank you, brian) 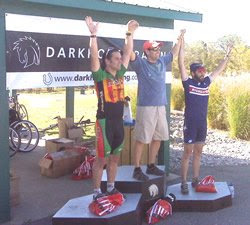 and then, we just hauled ass back to louisville in time to pick kids up at school.
Posted by zanne

Haven't read the post yet, am working from home tonight, so this has to be fast. I don't have an email for you either! mine is judir6@gmail.com - anyways, i will be there at 9am to run with my friend julie - will look for you!

nice! a cross race on a friday with a packed field! nice!

and man, packing the car for races with all those snacks and clothes and bikes and books and gameboys...

well, it feels so leisurely to not have to, doesn't it?

lauren, yeah - the friday thing without the kids was pretty fun. its a big 3 day weekend of racing in cincinatti ... i skipped yesterdays' race but am headed back up today - with kids, toys, snacks & crayons in tow!

judi - will look for you! we should be pulling in right around 9 ... have a good run!