we took a day off today. a day off from roller practice, (actually, any form of riding whatsoever), website updating and upgrading, emails, copywriting, laundry, email list-serve posts, sinks full of dishes, piles of paper on dining room table, the stimulus package and the dogs’ muddy paw prints all over the furniture - we took a break from all that to attend the north american handmade bike show.

there were all kinds of snazzy things at the show. but mostly, i just cared about was whether or not it was pretty, it spoke to me, or if i could add it to the sticker collection on my beer fridge.

so, after listening to crazy storms all night and hitting snooze for an hour starting at 5am, packing lunches, getting kids off to school and watching my husband charge up the car battery after we left the light on all night, and a whole plethora of other events; to follow are a few of the things that spoke to me once we arrived in indianapolis: 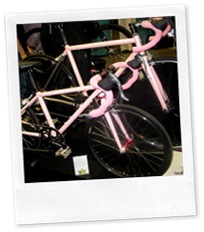 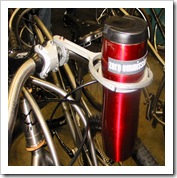 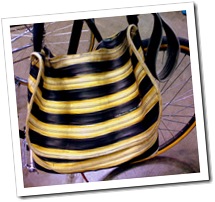 this fall, i had a crafty idea in mind and a pile of inner tubes to try to bring it to fruition: a messenger bag made out of inner tubes. i gave it a go, but it never quite came out the way it was in my head. some boys from tokyo had the right idea though, and beat me to it. 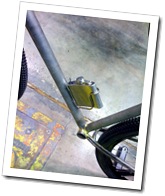 and then of course, there was a little, do you hear the angels singing moment when i saw the flask holders on the cool fixies, singlepseeds and tandems. 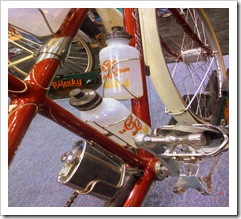 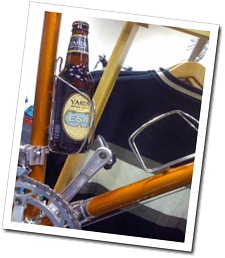 there was much to covet. the snazzy orange bike with the rockin’ orange tires from the snazzy italians, 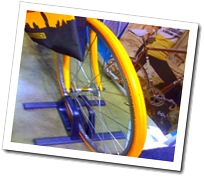 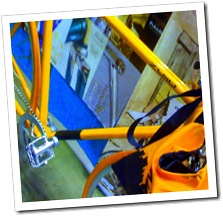 and the sweet ‘cross bike from the cool new englanders’ in lynn, massachusetts

there were bike baskets, saddle bags, cool shiny things to attach to your headtube that said courage. i could use a little courage during cross season. i should have bought one. but i had already bought a sweet sweatshirt from october bikes, and we’re in a recession and all. there were handlebars wrapped in leather and handsewn with cool little finishing detail touches, there were some of the cutest saddle bags i’ve ever seen, but she doesn’t have a website and there was a polka dot bike that would look so cool with my kit. 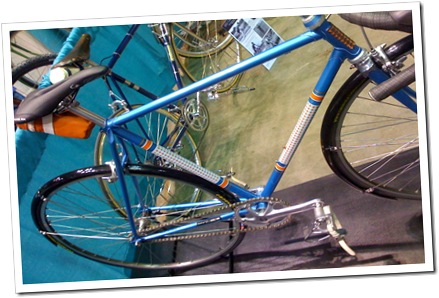 thanks for sharing! very cool stuff. wish we could have gone....

Great show by the sound of it. Love the SS/Fixie on your last photo. What a cool looking bike!

As for the little courage sign: Just write it on paper and stick it to the handlebar with clear sticky tape. Alberto always puts stuff on his handlebars or top tube, e.g. HR zones or race profile. This way you can also vary the messages you wanna give yourself, e.g. I'm fast. I'm totally bad ass... :-)

Self leveling coffee holder? I NEED one of those....
Great pics, love the mother/daughter bikes too.
My triathlon went well- not too bad for my first go. I am doing another one in a fortnight (just an enticer) hopefully on my new bike....

now those are aswesome ways to pimp out you bike!!

The matching pink bikes are my fav! Wait... I forgot about the coffee holder and flask.... now I don't know which I like best.